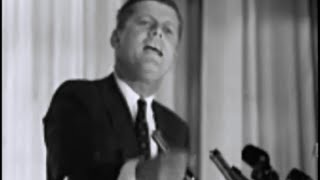 With two weeks away from electing the next President of the United States, where could you find the Democratic nominee? Well, right here in Rockford, Illinois, of course! Then-Senator John F. Kennedy campaigned in downtown Rockford in October, 1960. His competition, then-Vice President Richard Nixon, had campaigned here a month before. Illinois was what Ohio is now: a major swing state whose winner was likely to be the next president. Now, Winnebago County was (and still is)